Menu
Log in
Register
Install the app
You are using an out of date browser. It may not display this or other websites correctly.
You should upgrade or use an alternative browser.

This generator forum has been a little dull lately, so let's get something started. I'll get the ball rolling with my latest project.

Well, finally got around to making some content on this subject. Last year, I picked up a little Predator 4375 generator to charge my Alta when we were going to be out for longer than a battery's worth of riding. I also had the thought at the back of my mind that I could hook it up to the house if/when we have a power outage. I never ended up using it.

My main dilemma was that I have two Altas that I ride with my sons. The little Predator just wasn't big enough to charge both bikes at the same time on 240v. I didn't think it was really worth it to sit around on my ass while the bikes charged on 120v. Would have taken all day to charge two bikes. So I sold the Predator (actually made some money off of it since I sold it for more than I paid for it!) and picked up the Westinghouse. It should have enough giddy-up to charge both bikes at the same time, and it actually has two 240v outlets (one 30amp and one 50amp). I will be doing some additional testing to see if this actually works in reality or not, but I'll post some video on that later. I really wanted to get a quieter inverter generator, but I couldn't find one that was quite powerful enough to do what I wanted to do. If I find one, I might still buy it.

The first thing I did to the generator was put it on some big 10" pneumatic wheels. It looks like a badass 4x4 now! While I admit I like that it looks cool, I added the wheels for a couple of very practical reasons. It makes it much more easy to roll (this beast is 220lbs!) across rough terrain. Also, you don't have to pick up one end of it except to turn it. The pneumatic tires also absorb a lot of the vibration from the generator, which always helps. I also raised the generator up a bit and widened the track so that I can slide my Black Widow ramp under it when it is in the back of the truck. The setup is just narrow enough that I can fit it between the two Altas, and then put my ramp underneath. This is in the back of a short-bed Tundra.

My next project was building a generator shed for this beast. Not only did I need to store it, but I needed to quiet it down. This generator is WAY louder than the advertised DB rating. I live in a quiet residential neighborhood, so it would not pay to make a lot of noise even if there was a power outage. Besides, I didn't want to attract zombies to the noise of the generator in post-apocalyptic situations; it's never smart to get your brains eaten, even if your fridge is still cold.

I scoured YouTube for lots of generator shed ideas and soundproofing tips. There is a lot of good content out there, and I liberally stole quite a few ideas from them. There is also a whole load of crap that is useless and downright dangerous. (I can't believe how many people build their generator sheds right outside a bedroom window or dangerous BS like that!) Some guys didn't ventilate their sheds at all or take any precautions against overheating, etc. Also, some people's ideas of soundproofing were ridiculously inadequate. One guy got a whole 2db of improvement from his shed, and he thought it was a huge deal.

I had a generator inlet box installed in the house, along with a generator interlock kit. I was going to build a wood shed, but the price of wood lately is ridiculous. Lucked out and found a plastic Suncast shed on Craigslist for only $150. It was new in the box, but the owner had never put it together.

I also had an idea for a generator muffler that might work. It is based on the design of a standard glass-packed motorcycle muffler, only on a much bigger scale. It turned out great! I call it the FrankenMuffler. You can see it in the video below, and I'll post some more details later on the parts I used. Not really a portable option, but it works better than any solution I've seen so far.

I also noted that one of the other big sources for noise were the air inlet/outlet vents in the shed. I used some scrap wood and leftover sound insulation to build some sound baffles that fit over the vents. They also worked really well. When not in use, they can fit in the shed with generator.

For sound insulation, I went with Rockwool, which is mineral wool rather than fiberglass. I used the semi-rigid ComfortBoard 80 for the interior of the shed and the inside of the baffles. I also used a combination of the rigid boards and the fluffier batts for the material inside the muffler. It is not only a great sound insulator, but it is fire resistant to over 2000 degrees F. You can hold a torch to it and it won't burn or melt. Really cool stuff, so to speak. My main strategy was to absorb the sound energy where I could, and to change the direction of the airflow when possible. Air goes around corners just fine, but sound doesn't really like to turn unless it is reflected.

Anyway, more info to come on the generator and how to make the muffler, etc. But take a look at the vid below to see how the shed turned out. There are some links in the comments to some earlier sound testing I conducted with just the bare plastic shed, and also with some sound insulation but without the muffler.

I've had lots of questions on my strange trashcan muffler on my generator shed. So I posted a new video going into how I designed it and parts I used to build it. It's so effective, I might put one on my Alta to quiet it down!

Finally got around to the Big Test, and the reason I bought this generator in the first place. Will the generator charge two Altas @ 240v? I probably should have tested this first before taking a couple weeks to build a friggin' shed. But I didn't do that, so here are the results.

Random side note. For whatever reason, I have never had both of my rapid chargers side-by-side before. I finally noticed that one has much thicker cables than the other. Weird that I never noticed that distinction before.

Another related question for the group. Does anyone know of a line splitter for 240v circuits? There are tons of line splitters for 120v ones, but never seen one for 240v. I'd like to see how many amps I am pulling on my generator, but it doesn't work to put a clamp meter around both parts of the AC circuit, since the net is zero.

I guess I can make my own, but it sure is a pain in the ass that nobody seems to make one, or a power meter for 240v circuits showing Amps/watts. I'll either need to split apart a 30 or 50 amp extension cord, or make my own. Those 240v plugs/cords are pretty pricey, even for a short one! The only power meter I've been able to find for 240v is for an RV, but it is like hundreds of dollars since it is built into a surge protector. I assume I'd have to have two loops, since the 240v is actually two 120v legs.

Anyway, just annoyed that nobody makes these for 240v. Seems like there would be a market for this kind of thing, at least in the RV world. Maybe a product idea.

This thing is about the cheapest 240v power meter (built into a surge protector) I could find for 50 amp: 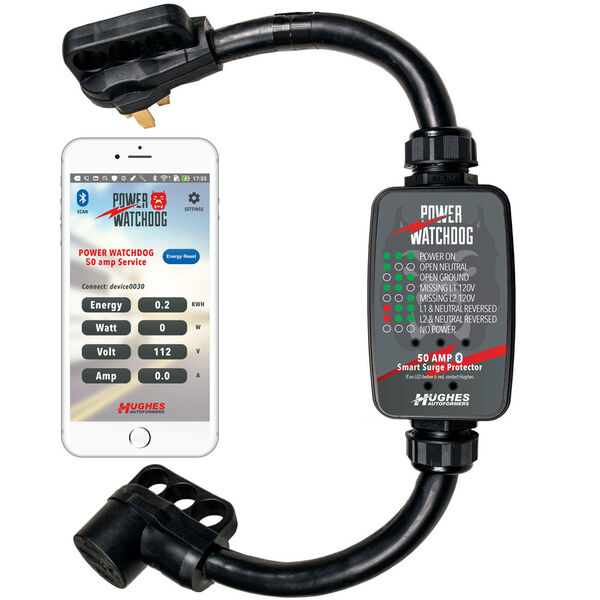 you might be able to get your clamp around a wire on the back side of the receptacle on the generator.

Or gently slice lengthwise the cable sheath of the supply cord to gain access to one of the legs. The insulation is pretty thin on the one with the smaller cord, you can see the strands of the wire lurking there. Then you can double check that the wires are marked as the appropriate gauge for the charger, too
You must log in or register to reply here.
Similar threads